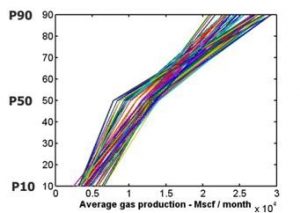 Figure 1–P10, P50 and P90 predictions of gas production for horizontal wells drilled in the Parker County of the Barnett Shale (Awoleke and Lane, 2011)

Identification of trends and relationships between response variables (ex. hydrocarbon production) and parameters (ex. reservoir, production and operational data) using conventional statistical concepts and machine learning techniques. These analysis techniques are particularly useful when the approximate models used to represent physical systems are inadequate (unconventional reservoirs). An example application is the prediction of water and gas production from counties in the Barnett Shale using completion and stimulation data. Figure 1 shows the probabilistic distribution for gas production from horizontal wells in the Parker County of the Barnett Shale.

II- The incorporation of uncertainty into the models used by petroleum engineers to predict oil and gas well productivity using Bayesian and time series analysis methods.

Reservoir engineers have been more successful in the incorporation of uncertainty into their models. At present, it is the norm to include some kind of uncertainty estimate in productivity predictions. However, predicting and optimizing production for a single well is still the domain of the production engineer. As such, the production engineer needs to be able to incorporate uncertainty into the modeling process. An investigation into the feasibility of this approach was attempted.

Figure 2 is a summary of the initial work, using production data from a gas well.  Time series data (in this case, production rate versus time) can generally be decoupled into two components, that is, (1) the trend part – output from the reservoir simulator or proxy (like the Arps equation and its more modern variants) and, (2) the stochastic part or the residual, which is the difference between the observed and calculated data. Time series analysis techniques can be used to model the residual.

Make PDL your first point of contact with the University of Alaska Fairbanks, regardless of your research needs.